BACK to the CONSTITUTION! (click here for full blog)

I was listening to the third presidential debate a couple of weeks ago(I’m not really sure why…), and one of the early questions by Chris Wallace was this; “If you are elected president, where would you like to see the Supreme Court take our nation?”. I about came unglued. I nearly rose up from my chair, as I said, “Wallace, that is a stupid question!”.

Here’s why I think it is so stupid. He is encouraging, by this question, the continuation of the mentality which we have adopted in America over the last few decades. That is, acceptance of the fact that our judicial system is properly functioning with activist judges. Nothing could be further from the truth, and nothing is more detrimental to a system that demands fairness and justice, than having judges which go beyond their purview of interpreting the law, and position themselves to actually write the law.

So I said, “Let me answer that question Mr. Wallace. I want the Supreme Court to take us BACK to the CONSTITUTION! 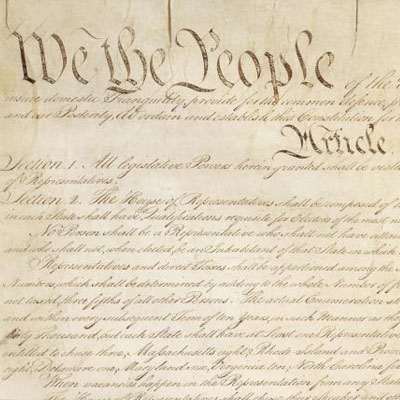 ”. When you have nine people who assume that it is acceptable to go beyond the parameters of the original intent of the Constitution, then we no longer have a third branch of government which will properly function to keep the other two branches in check. Rather, we have an overreach which will do damage to the American populace.

You see, we have gotten to the place that we think we must have a “balance of power” on the Supreme Court. This is absurd. Here’s what the balance of the Supreme Court should be on almost every issue – nine to zero! We need nine constitutionalists! Nine men and women who, on almost every issue, will be in agreement on the original intent of the Constitution. This will not only properly defend the American people, but it will also send a message to the other branches of government and to the American people at-large that this is a branch of government which you can trust to ensure that our government will continue to be a government of the people, for the people, and by the people.